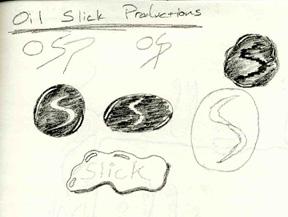 The origin of Spilled Milk® was the result of a couple hours of doodling.  I started out with the concept of an oil slick.  I liked the rainbow patterns that change with the movement of oil and thought that this would make a cool animated logo (already thinking of a web-site).  The outside of the logo would be circular and the letters that spelled out the name would float within the drop of oil. The name "Oil Slick" almost stuck, but I thought the word "slick" had good and bad connotations.  Sometimes you can't go with your first try, even though it might turn out to be the best one. In this case, it wasn't. 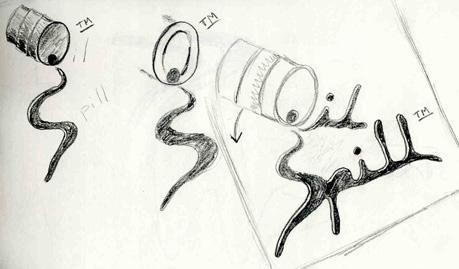 I then drew a barrel of oil spilling/spelling out the name "Oil Spill", much like the Spilled Milk logo.  The oil seemed too dark on the page and oil spills in general have a very dark feeling about them.  You could see it coming from a mile away that "Oil Spill" was not going to make it. 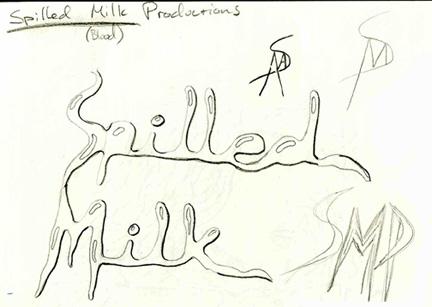 I liked the way the "Oil Spill" logo flowed across the page and needed something else that flowed.  I thought about ink.   Nope, too dark.  Plus, spilling ink and comics don't mix very well.  The old adage just popped into my head and "Spilled Milk" was born.

The sketch above is a far cry from what was done next.  I drew what was to be the final logo on a huge comic page and then inked it.   I took it to Signal Graphics and they had some trouble scanning it in for me, but eventually they got me the letterhead and envelopes I wanted.  They gave me the scans on disk and I was able to use them on this web-site before I got a scanner myself.   If you saw the web-site when it first opened you saw a huge logo which took forever to load (just to see a logo).

I was able to reduce the scan using Photoshop to create the logo that you see on each page.  I took a copy of that and filled it in with black so all you could see is an silhouette.  Then I reversed the image so it was a white outline on a black background.  I brought this 512 x 512 image into Bryce 4.0 and created a symmetric lattice, after applying some rounding in the editor.  The rounding made some of the letters run together, but it looks a little more realistic that way.  The result was a bulky logo so I created a floor (gray) and pushed the lattice down through the floor until it looked like Spilled Milk.

It seems like there is much crying in the comic industry with company titles that are crying for the sun to come up and book titles that tell people not to cry.  I figured I'm not crying here, so you just need to hurdle over the adversity that is thrown your way and use that momentum to keep going forward.

I've gotten great reactions to the name from the folks at the art supplies shop to Card Secure (now eHost, B2Bnow.com).  People seem to remember it probably because they can associate it with something they already know.  It makes most people laugh, and then they're stuck with it like a bad tune.  The name should be a good contrast, because the comic should be fairly dark with a few light moments to bring the reader up for air once in a while.